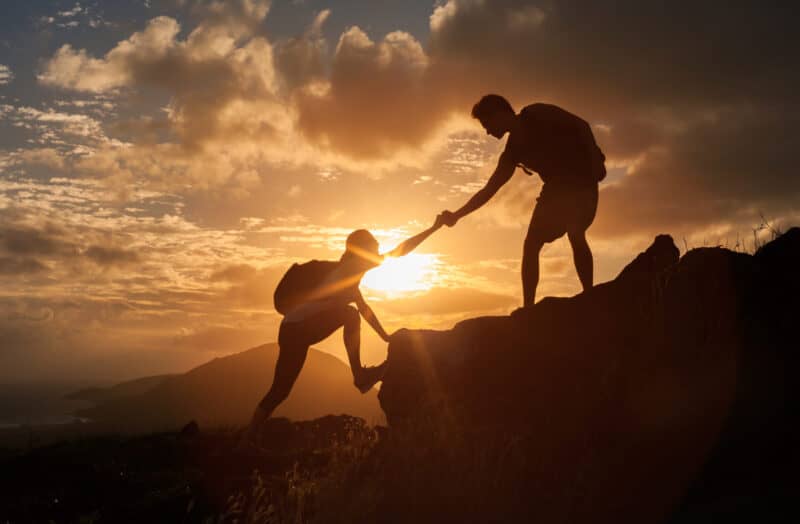 … in your hearts honor Christ, the Lord as holy, always being prepared to make a defense to anyone who asks you for a reason for the hope that is in you; yet do it with gentleness and respect.

As we begin 2021, I have been reflecting on my journey and our collective journey over the last 12 months.  I was thinking about my plans entering January 2020.   Plans to accomplish specific tasks, grow spiritually, travel, learn, as well as other things.

I had made my plans with what I thought were the best of intentions. However, as we all experienced, God’s plans were different from my plans.  These changes have caused me to refocus and adjust.  But, I found that if I focus on Him, he can use me and us to be agents in His eternal plan, and it can be beautiful.

A few weeks ago, I was in the Lake Charles, Louisiana area.  I had gone to help with our new Crisis Response site.  I also wanted to get a better sense of the needs of the area so that I could communicate those needs effectively with churches around the country.

I spent my first day driving around the area, reflecting on the amount of damage.  I was praying for the city and the area and that God would use this storm to bring people to him.

I also drove down to Cameron Parish where the storms first came ashore.  It took a long time to get there due to the work the utilities were doing to restore power and phone service.

After about 8 hours, I had taken many photographs of the impact of the storms, and I was ready to head back to the hotel.  I planned to grab dinner and finish up some work.

After arriving at the hotel, I grabbed my laptop and headed down to the lobby. I planned to go to Cheddar’s restaurant, which was just a couple of blocks from my hotel.  It seemed like a good place where I could sit down and work.  However, as I left the hotel and started my walk, I passed a Hilton hotel on the same parking lot as my hotel.  I noticed it had a small eating area in the lobby, that was not crowded, so I decided to go there instead of Cheddar’s.

When I entered the hotel lobby, I saw that the small eating area was pretty empty.  I decided to sit off to the side, so I could complete the work I had been planning to do.  As I opened my laptop, I was half-listening to the conversation of two men sitting not too far away from me while trying to organize my work.

The men were talking about the pandemic and some things that they had been seeing and their desire for it to be over.  I listened a bit more intently to see if I could find a way to enter the conversation.  Since they continued to talk about Covid-19, I jumped into the conversation and told them about some of my work on Pandemic Planning while I was working for IBM.

It was evident that they were interested in talking, so I closed my computer and asked them where they were from and why were they in Beaumont.

They were both pilots for a private air service and had landed in Lake Charles.  However, there was no place for them to stay in Lake Charles, so they had driven over to Beaumont to find a hotel.

For the first 45 minutes or so we talked about the current crisis and how it was impacting them, their families and their work.  The older of the two men, decided he had talked enough and excused himself to go to his room.  It was about 8:30 pm.

The younger man, Chris, stayed and seemed to want to talk more.  I started telling him about my work with the Crisis Response Ministry.  I told him that I was a Christian and I explained to him how I saw God working through crisis events.  Chris responded by telling me had gone to church when he was young. He also told me it was hard to make sense of what is happening and see how everything fits together.

As we continued our conversation, Chris said he had felt some type of guidance or influence in his life a number of times, including his application for a couple of jobs he did not get. In fact, he told me about seeing a cross on a hill right after one job interview, which he did not get, and it made him feel like everything will be ok.  A few weeks after that event, he was asked to join his present company as a pilot and an instructor.  And a few months later here he was, landing in Lake Charles but having to stay in Beaumont.

In times past I may have left our conversation there.  But it was plain for me to see that God had made this appointment.

I then led him through a presentation of the gospel.

Chris told me he had gone down front in his church as a boy, but was uncertain in his faith.  I reiterated to him the plan of salvation and our discussion continued for another couple of hours.  We had a great conversation diving into depth about salvation and what it means to live for Christ.

While Chris, did not make a decision for Christ that night it was evident that he was thirsty for the gospel message.  I told him that I would be praying for him and I ask you to pray for him as well.

I am reminded that as a Christian, my job is to go, to be available, to speak the truth of the Gospel and leave the results up to God.

So, let’s go.  Go humbly.  Go flexibly.  Go willingly or even with some hesitation, but go.  Go asking God to make His plans your plans and be prepared to be amazed at His results.

Then he said to his disciples, “The harvest is plentiful, but the laborers are few;  therefore pray earnestly to the Lord of the harvest to send out laborers into his harvest.”

What can you do to help?

We need both financial support and volunteer teams to come and serve.